Three teams from Chester Croquet Club took part in the Southport Festival of Croquet on 24th and 25th of June. This two day tournament is thought to be the largest single event croquet competition in the world. The team of Sarah Andrew, John Dawson and Robin Tasker playing full lawn Association Croquet came second in their section. The team won 8 of their 14 games. A novice team of Val Sanders, Hugh Bray and Helen Allcock playing short lawn Association Croquet were less successful winning 4 out of 15 games. The golf croquet team of Mel Hagan, Roger Haigh, Peter Fey, Chris Thomas, Elaine Smith and Sandy Finchett-Maddock played 21 games in all and won 8 of them.

A Chester team of Sarah Andrew, John Dawson, Jerry Guest and Alan Clare were back in Southport on Sunday 2nd July to play in the NW handicap league. A strong Southport team won 6 out of the 7 games, but the teams enjoyed great weather and wonderful lawn conditions

On Saturday 17 June, the Chester Golf Handicap team of Maureen Ivens (captain), Mel Hagan, Liz Subramanian and Brian Hayes travelled to Culcheth for a rearranged match in the North West golf croquet league. The match was played in glorious sunshine, in complete contrast to the rain in the previous week that had led to the cancellation. After some very close games, 4 of which went to the golden hoop, Culcheth won 11 – 7. Brian Hayes was playing in his first match for Chester and won 2 of his games, narrowly losing the other 2.

A Chester team of Paul Watson, Paul Taylor, Robin Tasker and John Dawson played Fylde on difficult lawns baked hard by the sweltering weather on Wednesday in the NW AC handicap league. In the morning Chester won the doubles and both singles and were fortunate to achieve a clean sweep by winning all the afternoon singles to win 7 – 0.

On Monday 19th June we had a visitor from Western Australia, Dave, who played AC all day. His handicap was 7. He is over in the UK to visit family, and looked us up on our website to see if he could get a game whilst he was over here.

Dave’s club is Moorabinda Croquet Club in Bunbury, Western Australia. He wasn’t bothered by the heat on Monday, as he often plays in 40 degrees!

One of our ex excellent AC players Dennis actually played at Moorabinda club when he went to Australia. Small world?

It’s good to welcome visitors, particularly from overseas, and to give them a good welcome. 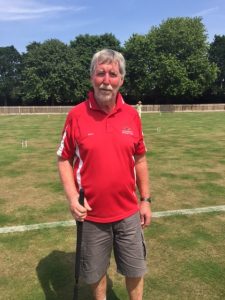 In the first round of this year’s Longman Cup competition Chester played away against Bury at Whitehead Park on Saturday, 17 June.

In glorious weather (some would say typical of Bury) the morning singles were halved, one game each to Bury and Chester, but the Chester duo of Paul Watson and David Boyd won the doubles. Half way through the afternoon the matches were evenly poised as the Bury players made good use of their bisques but the tide gradually turned such that Chester won all the afternoon singles to clinch the match 6-1, a margin which was somewhat harsh given the excellent play by the Bury team against a Chester team with significantly lower handicaps.

As a result of Chester’s win last year in the North West Federation’s weekend handicap league, the club was entered automatically in this year’s all England Secretary’s Shield knock-out competition. The first round match was against Oxford University which was played on neutral ground at Nottingham Croquet Club on Saturday, 10 June.

Representing Chester were David Boyd (captain), John Dawson, Robin Tasker and Brian Walton, and the team line-ups were as follows:

The morning session saw the two lower handicappers from each club playing the doubles with the higher handicappers playing singles. By lunchtime Oxford had taken a lead of 2 games to 1, Chester having pegged out to win only the doubles. The afternoon session was off to a storming start, when John Dawson, no doubt inspired by his recent appearance at the ‘Inter Counties’, pegged out 26 – 0 in just forty minutes to win his game with Ian Plummer, (fortunately the murmurings about performance enhancing substances soon subsided) and now with the score at all square there was still everything to play for.

The remaining three singles were much more ‘pedestrian’ with two of them lasting until ‘timed-out’. Two of these remaining games were won by Chester and one by Oxford giving a final result as a win for Chester by 4 games to 3.

Chester play against St Albans in the next round.

Chester Croquet Club played host to Deva Rotarians on Tuesday evening, 6 June, when 9 club volunteers supported the Rotary Club in having a fun evening of croquet. The Rotary chairman’s charity this year is the Stroke Therapy Unit at the Countess and any money raised on the evening was donated to that cause.

Throughout the season Chester Croquet Club offers various local groups the chance to learn about and play croquet, voluntarily supported by its own coaches and members. These groups include Mensa, Chester University, Soroptomists and Rotary. 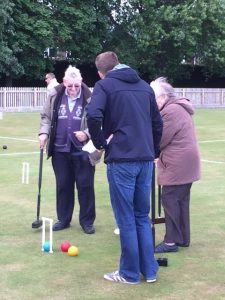 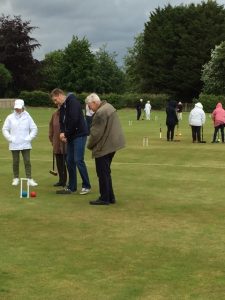 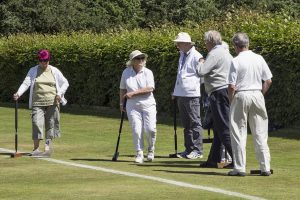 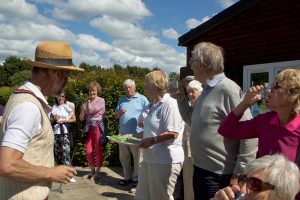 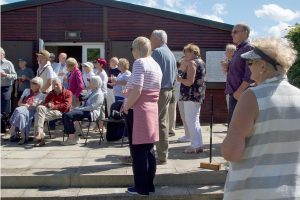 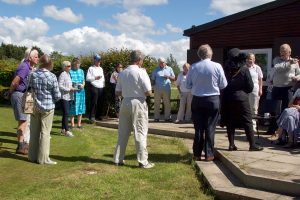 During the week, Chester competed in two NW leagues.

There was a victory by 4 games to 3 for the Chester team of Helen Brophy (captain), David Boyd, Robin Tasker and Paul Taylor in the mid week league match against Bury. Paul was playing in his first full lawn league match. The match was played at Bury on Wednesday 31st May, in glorious sunshine.

Most of the games had very close results, including Paul Taylor’s singles game, which he lost by just 1 hoop when his opponent rallied in the last turn  of the game, after Paul had been leading all through the game. Robin also had a very good singles game, when he won despite the drawback of having one of his balls pegged out by his opponent.

On Saturday, Chester lost the match against Fylde 13 – 3 in the NW short croquet league.  It was a lovely day for an enjoyable and friendly match against very good opponents who were far more experienced than the Chester team. Many of the games were harder fought than the score implies and given that more than one of our players was playing in a league match for the first time, they held their ground well, learning much from the skills of our visitors.

On Thursday 18th May the Chester Chariots team of Pat Clare (captain), David Boyd and Chris Thomas had an enjoyable day’s croquet in their level play away match against Bowdon Sinners. The lawns were good and the hoops were tight. Bowdon had a strong team and beat Chester 11 – 7.

On Saturday 27th May the Golf Croquet Handicap team were in action against Fylde at home. After an exciting match Chester emerged the victors 10-8.  Pauline Walters captained the Chester team of Liz Subramanian, Mavis Sellers and Janet Jackson.

On Sunday 28th May Chester played away against Bowdon in the NW Federation Advanced B League.  The day started rather grey and damp and the lawns were unusually slow but the Chester team of Jerry Guest (captain) playing singles and Elmyr Hughes and David Guyton playing doubles started well by winning both games in the morning.  The weather brightened during the day and Chester’s good fortune continued in the afternoon winning two of the three singles games.  The final result was a rewarding 4 – 1 win for Chester.

All four lawns are now closed for winter recuperation and will re-open at the beginning of the new season.

We are sad to report the recent deaths of two former members, Mary Croxton and Donald Sharpe. Both played croquet well into their 80s. Donald Sharpe was a former treasurer and designed the club’s crossed-mallets logo.

Beware of scam e-mail messages purporting to come from members of the club.