This tribute to the NHS was created by Cheshire West and Chester groundstaff by mowing the letters in the longer grass next to the cricket square and football pitches in Westminster Park. The photograph was taken from a drone operated by Russell Geomatics Ltd of Chester early in the morning of Thursday, 16 April. In addition to the NHS lettering, the colours of the spring foliage are particularly attractive. 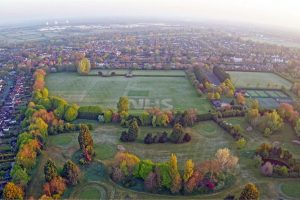 Latest guidance and some practical tips.

Croquet restarting! Chester Croquet Club is now open for play but the clubhouse remains closed and booking is required. More

More scam e-mail messages purporting to come from members of the club are being reported. Stay alert!

The NW Federation has decided to cancel this year’s Southport Festival and leagues in their current format.

Paper copies of the latest April-May issue of the Croquet Gazette have been posted and a digital edition is available to members at the CA website. If club members wish to continue to receive paper copies, they need to upgrade to Supporter Member.

All league matches and competitions remain cancelled until further notice