Following heavy rain earlier in the week and cancellation of the first North West league match of the season on Saturday, the weather perked up for the annual taster session for newcomers to the game which was held on Sunday, 8 April. The weather on the day was calm and dry with even a little sunshine showing through at times.  The session started with an overview of the game, introduction to mallet and swing, followed by a demonstration and a game of golf croquet. Lunch was provided and was much appreciated. The afternoon was devoted to the shots, demonstration and game of association croquet.

Sixteen visitors attended the event of whom five signed up for the association croquet beginners course starting later in the month and seven for golf croquet.

A further taster session for the University of Chester is being held on Tuesday, 17 April. 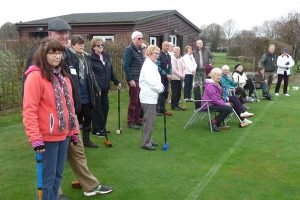 January update: Congratulations to Sally Slater and Paul Cronin on their most improved player awards. For reasons of prudence and caution during the present upsurge in the covid epidemic, the scheduled Planning Meeting on Friday, 14 January is being postponed to Wednesday, 23 February, and the AGM is being deferred until Friday 11 March. More  A summary of 2021 Club Results and Statistics is now available in the Members Only area.

Lawns now closed for winter recuperation and to avoid damage until the start of the new season in late March.

A reminder to members old and new to check everything is safe and secure, including the key safe, during and after play and particularly when you are the last to leave.

More stringent child safeguarding policies and procedures issued by the Croquet Association are being implemented by Chester Croquet Club. Check here for summary and links to key documents.