After a break of three years due to the coronavirus epidemic, Chester Croquet Club once again held its traditional end of season dinner and presentation of awards on Wednesday, 23 November. The event was held at Côte Brasserie in Chester and about fifty members attended. 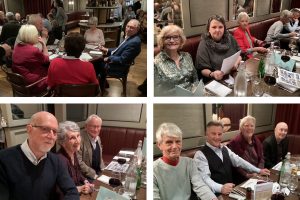 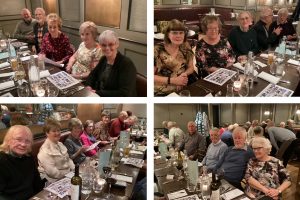 Club Chairman, Jayne Taylor, reported the club’s results in national competitions and regional leagues during another busy year with the club fielding a record number of teams.

In national competitions the most notable performance came in the association croquet Secretary’s Shield where Chester had beaten Middlesborough, York and Sheffield in earlier rounds and they were leading in the final against Newport when the match was rained off. It will be replayed at Chester on 29h April, 2023.

No silverware was won in the North West Federation leagues, but there were some good results for Chester, coming second in the advanced B level in the southern group, and third in the handicap association league.  Chester Senators also came third in the golf handicap and the Chester Centurions maintained their place in the top tier for level play.

Jayne Taylor then presented awards for internal club competitions held during the season.

There were also some excellent individual results from Chester members. Richard Smith won the Silver Salver association tournament at Shrewsbury in May and reached the semi finals of the Welsh Championships in September. Tom Grievson won the national golf B series tournament held at Pendle in May. Sarah Clements came second in the golf C level tournament held at Bury in July.