Chester Deva Rotary Club visited Chester Croquet Club for a fun social evening on Tuesday, 31 May. 15 Rotarians were shown the basic skills and then played competitive games in a progressive doubles, which was great fun. The evening finished with refreshments. The croquet club are always willing to host local charity groups and introduce them to croquet. This season there is a girl guides visit, Chester Rambling Club and Mensa all planned. 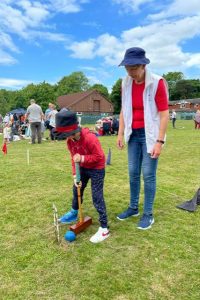 the following Saturday, 4 June, Chester Croquet Club put up a small lawn at the Westminster Park Jubilee Picnic and invited children and adults to have a go at croquet and see how many shots it took to get round the sixhoops. Many people participated. The winning child, with the least number of shots taken, was Georgia Folks, aged 8 from Cheadle. Matt Sargent was the best adult.

On a very wet Sunday, 5 June, the Chester Senators handicap golf team played at home against Bowdon. Chester won both doubles games with Edward Baskerville (captain) and Sarah Clements managing a tense 5-3 victory and in heavy rain Kerry Dadson and Pat Wheeler played exceptionally in a well matched game to make 6-4.The singles games went 8 to 6 in Chester’s favour with two games drawn 5 all and 6 all. A total of 98 hoops were run by Chester against 77 by Bowdon and an overall scoreline of 10-6 to Chester. Notwithstanding the inclement weather, the teams enjoyed after match strawberries and cream and chocolate cake, joining in the nation’s celebrations.