On Saturday, 11 June, Chester hosted the annual NW Federation association croquet handicap tournament. Reflecting national trends about minimising travel costs, the event attracted a field of only four competitors. However the quality of play was very high on the Chester lawns which had been specially cut and which sun and gusty wind had made exceptionally dry and fast – keeping a long distance take-off on the lawn was a nightmare.

In the first round Chris Alvey from Bury scraped an 18 -17 win over his wife Anne (apparently a first domestic victory!) whilst the rapidly improving Ged Smolskas, also from Bury, comfortably beat Paul Taylor of Chester. In the second round Chris turned up the heat for a big win over Ged whilst Ann had a solid win over Paul.

The final round produced dramas. Against Chris, Paul ended a steady break by burning through his remaining bisques. Victory should have been easy for the lower handicapped Chris but Paul steadily ran hoops whilst Chris spent his energies on marginally missed roquets or blobbed hoops. The result was an 18-3 win to Paul. The final game between Anne and Ged was for high stakes. Any win by Anne would give her the tournament whilst Ged needed a big win to take first place. When time was called the scores were level but Ged kept his nerve to score the final winning hoop. 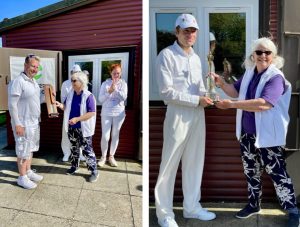