After two strong victories in previous rounds of the national Longman Cup competition a team from Chester Croquet Club made the 440 mile round trip to play against Letchworth in the semi-finals and finals weekend at Surbiton on Saturday and Sunday, 5-6 October.

The Chester team of Robin Tasker (captain), David Boyd, James Thomas and Paul Watson found themselves facing unexpectedly strong competition from a Letchworth team that fielded a minus handicap golf croquet player with a generously high association croquet handicap. Perhaps unsurprisingly the player gained easy victories in his two games and the overall result was a 3 – 4 loss by Chester despite good performances in other games. Letchworth duly went on to beat Sussex 5 -2 in the final on Sunday.

On the Sunday after relentless overnight rain Chester played a fun game of water croquet with the other semi-finalist, St Albans, and drove back to Cheshire. The company was great, the venue, apart from the rain, quite superb and our hosts wonderfully hospitable. But the croquet was disheartening. 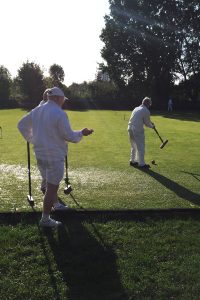