On Saturday 22nd April, the Chester team of David Boyd (captain), Helen Brophy, Derek Bell-Jones and Robin Tasker travelled to the outer reaches of the region to play Pendle and Craven in the first weekend Association Handicap league match of the season. Weatherwise they were treated to a very pleasant, warm Spring day.

The morning session of one doubles and two singles resulted in a tally of two:one in favour of Pendle, so there was everything to play for in the afternoon’s four single games. The situation was looking good for Chester for a while having won two games but, despite one of the remaining games finishing with a golden hoop, the final score was Pendle 4 – Chester 3.

The first match in the golf croquet handicap league was played at home against Llanfairfechan. The Chester team of Chris Thomas (captain), Peter Fey, Mel Hagan and Pauline Walters won convincingly 11-6. The doubles in the morning resulted in one all, but the singles matches played afterwards went strongly in Chester’s favour. Peter Fey won all four of his games. 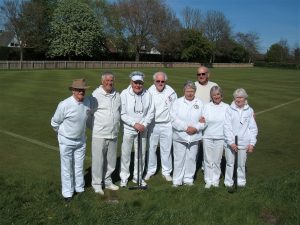 Chester team and Llanfairfechan team on Saturday at home to Chester.