Chester moved to the top of the North West midweek league following a close win over Bowdon Griffins on Monday 13th August. The team of Helen Brophy, Paul Watson, Michael Miller and John Dawson were 2-1 up going into lunch. The afternoon singles were split 2-2 as Chester secured the win 4-3.

This win was consolidated on Friday after the team of Robin Tasker, John Dawson, Michael Miller and Paul Taylor beat Bowdon Earls 4-3. The match was all square until the last game when Robin Tasker secured the win with a golden hoop after time had gone.

Chester croquet club are also leading the golf handicap league, with two matches left to play in the season.

A group of people from Mensa, pictured below, had their annual croquet day at the club at the weekend. They had a wonderful time and were very grateful for all the help they received. Even the weather was kind, with the first drops appearing as the deck chairs were being put away. 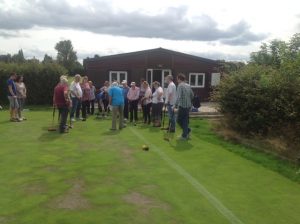 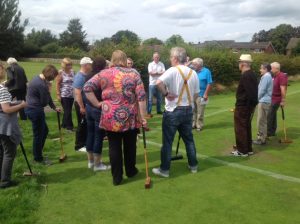