James Thomas of Chester and Llanfairfechan croquet clubs played his first Croquet Association tournament at Fylde last weekend. As usual it was a strict Swiss event of 5 rounds, the draw being made with numbered sticks of Blackpool Rock. Light drizzle fell slowly all day but the new drainage system kept the lawns unpuddled and entirely playable all day.
An early lawn inspection took place on Sunday due to constant overnight rain. Despite the nearby Seniors Open Golf at Royal Lytham being postponed until 1pm, the Fylde Lawns were entirely playable. Round four started with James Thomas and Philip Bass both on 3/3. James won that round +2.
During the lunch break the rain had stopped and the drainage worked, so round five was able to proceed in what turned out to be the best session of the tournament. James won his final game 26 – 0 with some bisques remaining, throwing in a well organised Rover peel to take the trophy. 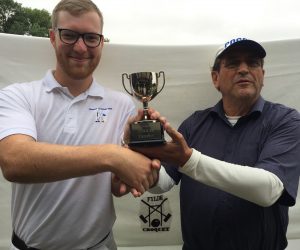 In the national Mary Rose competition Chester was knocked out by Nottingham by 5 games to 2 on Monday 29th July. However, in consolation Mark Lloyd won his singles game with a triple peel.

Golf croquet players – your chance to take part in this year’s NW Millennium golf handicap competition at Southport on Saturday, 28 May. More

NW Millennium Golf Handicap Competition on Saturday, 28 May, at Southport

Southport Festival of Croquet on Saturday and Sunday, 25-26 June