Teams from Chester Croquet Club have had a busy week in national and regional competitions.

In the national Mary Rose association croquet competition, Chester beat Pendle 4 – 3 at Chester on 8th July. Jerry Guest (captain), Mark Lloyd, John Dawson and David Boyd now progress to the next round where they play Nottingham at Nottingham.

On Wednesday 10th July, Chester and Broadwas played their second round / quarter final match in another national competition – the 2019 Secretary’s Shield tournament – at Shrewsbury Croquet Club. The match was evenly balanced, where the final result could easily have gone either way but Chester finally had their chances and managed to overtake Broadwas during the last ten minutes to give them the edge and the final victory 4-3. The victorious Chester team was David Boyd (captain), Robin Tasker, Paul Watson and John Dawson. Chester is now due to play Ashby in the semi-final.

Also on Wednesday 10th July, 12 contestants from the North West region took part in the Millennium Golf Handicap Tournament hosted by Chester Croquet Club. We welcomed competitors from Crake in the north of the region to Llanfairfechan in the south. Two groups of 6 players played a round robin, with the winners of each group playing for first place and the runner’s up in each group playing for third place. In a closely fought final Sam Seal from Llanfairfechan beat Roger Edwards from Craig y Don 6-4. The third place went to David Leach from Bury who narrowly defeated Brian Hayes from Chester 7-6 at the golden hoop. It was perfect weather, the lawns looked great and everyone remembered why they love croquet!

Chester played Bowdon twice during the week in the NW Federation midweek and weekend full lawn handicap leagues. On Friday, 12 July, the Chester team of David Guyton (captain), John Dawson, Robin Tasker and Paul Watson played away against Bowdon Earls. The weather varied from a heavy shower shortly after the start followed by bright sunshine later. Individual games were equally varied with some comfortable wins for Bowdon and some narrower wins for Chester giving an overall 4 – 3 win for Bowdon. Several of the players met again on Sunday, 14th July, when Chester played at home against Bowdon St Mary’s. This time, the Chester team was David Guyton (captain), David Boyd, John Dawson and Brian Walton. Bowdon found the slope and variable surface of Chester’s lawns more of a challenge compared with their lawns, and the match ended with a 4 – 2 win for Chester and one draw.

On Saturday 13th July, the Chester short lawn team of Sally Slater (captain), Val Sanders, Pat Wheeler and Nigel Worthington played Bury Vikings in the NW Federation league. Chester was leading by 2 games at lunch, but Bury caught up in the afternoon and the final score was a draw 8-8.

At the same time the golf croquet team of Edward Baskerville (captain), Janet Jackson, Liz Baskerville and Brian Hayes played Fylde Coasters at Chester. The rain stayed off and Chester won by 12 games to 6. 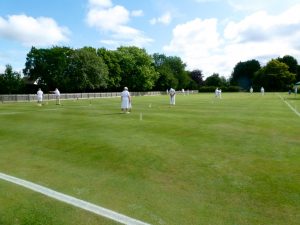