Chester Croquet Club was represented by two of their members, Trevor Farrell and David Boyd, in the Northern area B Level Golf Croquet tournament played at Bury CC on Saturday 8th July.

Sixteen players from both sides of the Pennines were divided into two blocks of eight to compete in the group stage for a place in the final so Bury’s three new lawns at Whitehead park were kept in continuous use all day, with each player having to complete seven games. After eight hours of play the group stage results were showing that it had been a very closely fought competition with many games going to the golden hoop, and that both the Chester players had qualified for the semi-finals.

After another four very closely fought matches David Boyd had a golden hoop win over Roger I’Anson of N. Yorkshire in the final to win the trophy and Trevor Farrell beat Phil Nuttall of Bury to take third place.

David Boyd’s win qualifies him for an All England final to be played at Southport later in the year. 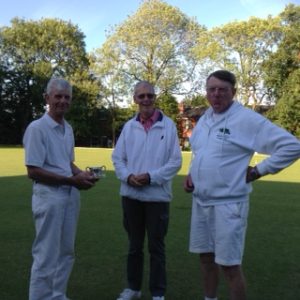