Persistent rain all day on Thursday 9th May did not dampen the enthusiasm for the Chester croquet club annual derby, when the two level play teams met to battle it out in the North West Federation level play league.
The Chester Centurions David Crawford, Sally Slater and captain Alan Clare beat the Chester Chariots, Paul Taylor, Janet Jackson and Pat Clare by 14 games to 4. The Centurions have started well in defending their North West champions title.
James Thomas, from Chester and Llanfairfechan clubs, won the North West millennium short lawn event held at Fylde on Saturday 11th May. James only started playing association croquet last season, so this was a fantastic achievement, and was the first external tournament he has entered. He remained unbeaten after three rounds, as did Tony Phillips from Bury club, so they contested a final game. James won with two fine breaks. 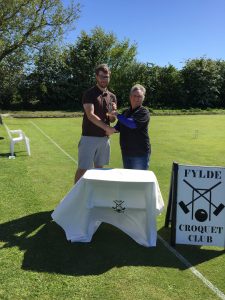